Besides the fact that the 2011 Family Circle Tennis Tournament is set to begin, Daniel Island will play host to the World Team Tennis competition later this summer!

the “Best Tennis Town in America.” The Family Circle Tennis Center in Charleston, S.C., will

presented by GEICO. The three‐day, season‐ending event will include WTT Conference

Championship matches and the WTT Finals. In 2010, the Kansas City Explorers captured their

and runs through July 21, with the top two teams from each conference advancing to the WTT

Finals Weekend. The Eastern Conference Championship will be at 7 p.m. on Friday, July 22,

with the Western Conference Championship set for 5 p.m. on Saturday, July 23. The

Conference Champions face off in the WTT Finals at 5 p.m. on Sunday, July 24.

Tickets for the WTT Finals Weekend presented by GEICO go on sale April 4 at 10 a.m. EDT.

Ticketmaster at (800) 745‐3000. Tickets can be purchased online at www.FamilyCircleCup.com

United States Tennis Association. The Family Circle Tennis Center is one of the premiere tennis

facilities in the U.S. and is the annual home of the popular WTA event, Family Circle Cup (April

To view my blog about the Best Tennis Town click here.
Posted by Jeff Dennis at 1:41 PM No comments: 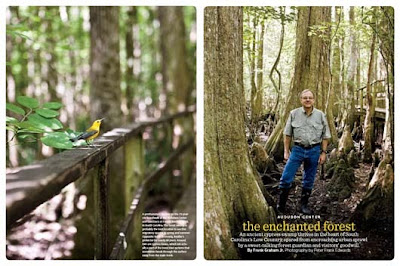 Francis Beidler Forest is undergoing a fundraising campaign to replace their existing boardwalk which has become in need of repair. The boardwalk allows anyone and everyone to penetrate the swamp and explore its natural beauty. Local birders may recall that Jeff Dennis served for six years on the Board of the Charleston Audubon Chanpter in the 1990's. Let's hope that the new boardwalk campaign is a big success! Here is a link to the feature article on Norm Brunswig in the Jan./Feb issue of Audubon Magazine.
PhotoByAudubonSociety: The cover pages of the feature article show a prothonotary warbler (in yellow) and Norm Brunswig (in field khaki).
Video on Francis Beidler Forest, a Ramsar wetland of International Importance right here in the Lowcountry Outdoors
Video on Project Prothro, an ongoing project to study the prothonotary warbler
Posted by Jeff Dennis at 7:06 AM No comments:

VideoByJeffDennis: 10-year old Hunter Mock of Allendale is still on Cloud Nine about his trophy white-tail. This video was shot at the 2011 Palmetto Sportsman Classic.
Posted by Jeff Dennis at 9:47 PM No comments: 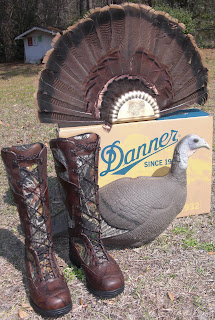 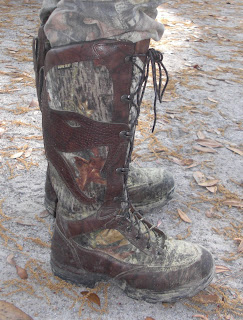 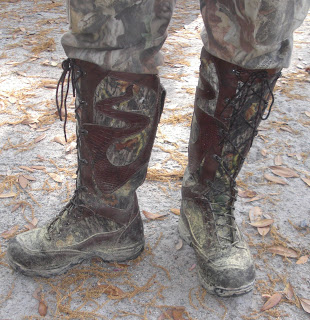 One of the most essential gear choices of turkey season is the right snake boots. Danner boots has been making quality products since 1932 and their camo waterproof Pronghorn boots are some of the most comfortable around. Since they lace up in the front, they are easy to take on and off, meaning that a boot jack is not necessary. Learn more about their products by watching this really neat video at www.Danner.com
PhotosByJeffDennis: New and used photos of the Danner Pronghorn GTX snake boots
Posted by Jeff Dennis at 8:22 PM No comments: 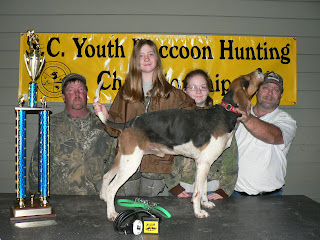 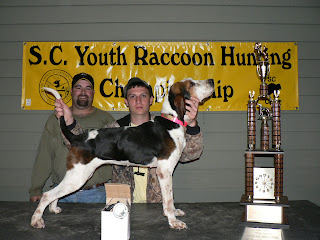 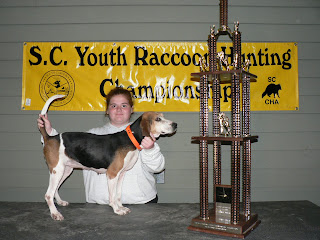 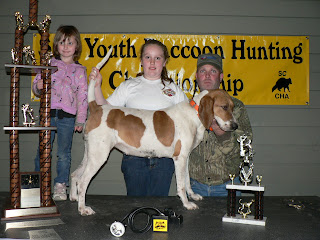 To view past blog entires for the State Youth Coon Hunt click here.
Posted by Jeff Dennis at 8:22 AM No comments: 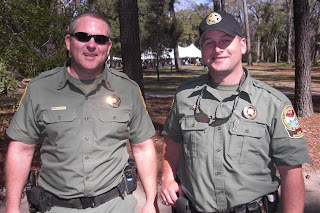 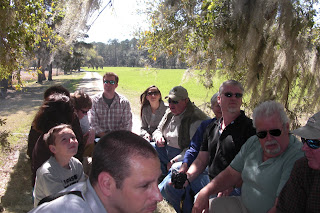 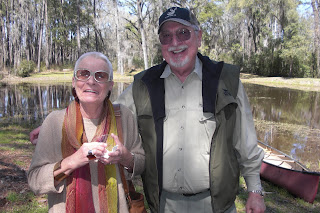 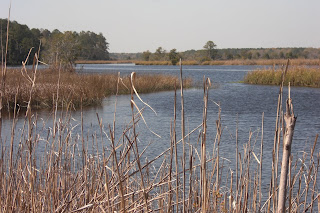 The Lowcountry Open Land Trust continues to celebrate its Silver Moon anniversary of 25 years in existence and the membership made a return trip to Lavington Plantation, which rests on the banks of the Ashepoo River in the heart of the ACE Basin. A beautiful sunny day greeted those who came to eat oysters and barbecue while drinking in the serenity of a property that has been placed under the protection of a conservation easement. A fellowship of caring landowners was present as the LOLT members seem to know and understand the importance and urgency of conservation and preservation in the Lowcountry.
To view my blog about the 2011 LOLT Annual Meeting click here.
PhotosByJeff Dennis: DNR's Michael Paul Thomas and J.P. Jones were on duty to provide hunting and fishing instruction for the next generation of conservationists; It seems everyone was treated to a hayride through historic Lavington; Elfie and Dr. Pete Von Lehe enjoyed the oysters and the talk about the upcoming turkey season; The Ashepoo River winds through the ACE Basin as seen from the dike
Posted by Jeff Dennis at 1:08 PM No comments: 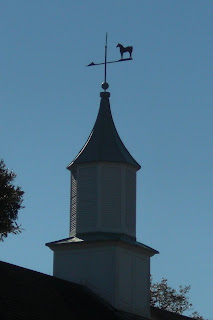 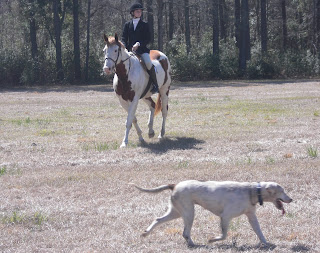 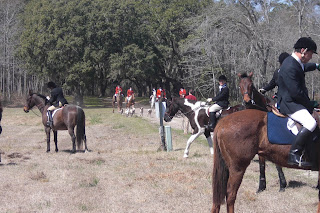 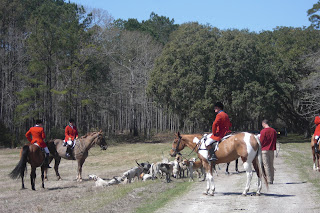 The Lowcountry Hunt, founded in the Spring of 2006, completed its 2011 fixture card with its annual closing meet at Airy Hall on a beautiful sunny Saturday afternoon. With the mission of conservation central to the activities of the Lowcountry Hunt, this group of fox hunters moves with ease between some of the oldest and grandest plantations in the Lowcountry. The big excitement of the meet came when a coyote was flushed in the woods by the hounds, which then pushed it towards Bennet's Point Road and Ashepoo plantation. The Whippers-In performed their job admirably as they turned the hounds back into the drive while avoiding the traffic associated with the St. Patrick's Day celebration being conducted at Bennett's Point. To visit the website for the Lowcountry Hunt click here.
To view my blog entry on the Closing Meet from 2010 click here.
PhotosByJeffDennis: The weather vane atop the stable is adorned with the figure of a horse; A hound runs by a young fox hunter; the whippers-in return to the field with the hounds ahead of them; an exhilarating run after a coyote calls for some relaxation time in the sun
Posted by Jeff Dennis at 5:09 PM No comments: 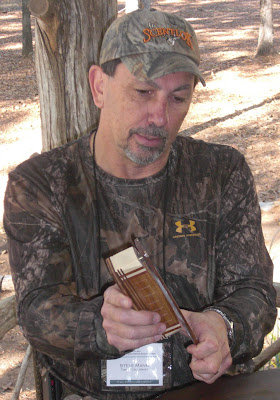 I met Steve Mann in the Fall of 2010 and found him to be a sincere individual who makes custom turkey calls of the highest quality, having learned the trade from the late Neil Cost. This ten-minute video allows some insights into his workshop and call making mentality.
To read my story in The Charleston Mercury click here.
PhotoByJeffDennis: Steve Mann demonstrates his call
Posted by Jeff Dennis at 9:58 AM No comments:

For the second year in a row the Citadel's chapter of DU has made this prestigious category:

Ducks Unlimited announces its Sweet 16 listing of top-producing college chapters throughout the nation. The following list of chapters made it into the elite group out of nearly 120 DU collegiate chapters.

To qualify for the "DU Sweet 16," chapters needed to raise more than $11,000 in grassroots income during the 2010 calendar year. Collegiate chapters throughout the country have raised more than $513,680 this year, with $290,650 coming from the Sweet 16 chapters.
"Ducks Unlimited's university program has become a critical part of our overall fundraising effort. Not only is it vital from a direct financial perspective, but it's also a source of organizational awareness and a strong and consistent volunteer base," said David Schuessler, DU's national director of grassroots fundraising. "The volunteers who make up these 16 college chapters are the future conservation leaders of not only DU, but all conservation efforts in the country. I personally thank them for their efforts."

To view past blog entries about Ducks Unlimited in S.C. click here.

Posted by Jeff Dennis at 7:07 PM No comments: 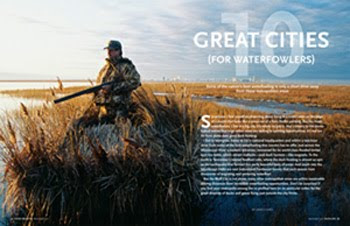 James Card wrote.... Located in the heart of South Carolina's wetland-rich Lowcountry, Charleston has long been a hub for sportsmen in general and waterfowlers in particular. The neighboring ACE Basin, where the Ashepoo, Combahee, and Edisto rivers flow into the Atlantic Ocean, is one of the largest remaining undeveloped estuaries along the East Coast. The region also supports up to 50 percent of the Atlantic Flyway's dabbling ducks, including pintails, gadwalls, blue- and green-winged teal, and resident mottled ducks. "This is a key conservation area for DU," says regional director James Meadows. "More than 100,000 acres of wildlife habitat have been protected by private landowners who have donated conservation easements to DU."
Some of the best duck hunting in the Charleston area is found on private duck clubs that are intensively managed for waterfowl and other wildlife. But there's also an abundance of public land near town. Along the coast, Bear Island and the Santee Coastal Reserve WMAs offer excellent public hunting for those lucky enough to draw a blind. And 45 miles inland is the Santee Cooper WMA on Lake Marion, where DU and partners have restored prime habitat for waterfowl.

"Duck hunters should put in for the WMA draw hunts," Meadows advises. "They offer some pretty phenomenal hunting."

To view past blog entries about Ducks Unlimited in S.C. click here.

To read about my attending the 2005 filming of DU TV in Oklahoma click here.
Posted by Jeff Dennis at 8:19 PM No comments: 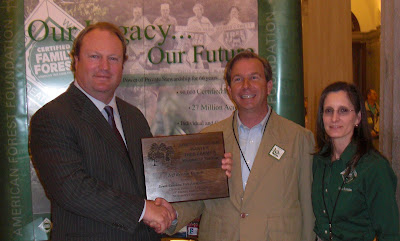 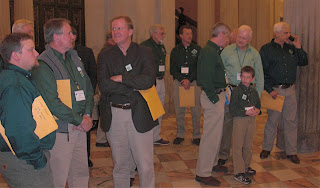 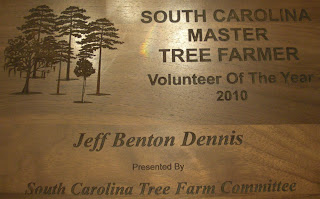 The 65th Anniversary of the S.C. Tree Farm program was commemorated by a Legislative lobby day at the statehouse in Columbia on March 2. Approximately 50 Tree Farm representatives gathered at 8 a.m. to get in a full day of activities, with an equal balance of landowners and forestry professionals attending. As one part of the day-long event, I was awarded the Master Tree Farmer program 2010 Volunteer of the Year for my work raising awareness about forestry in Colleton County and the ACE Basin. To read more about these efforts please visit my website at www.LowcountryOutdoors.com and click on the PL-ACE button. As a small private landowner and advocate for the natural resources of the Lowcountry, I will continue to showcase the positive aspects of the outdoors. Special thanks go the the House and Senate for passing a resolution in support of the S.C. Tree Farm system's contributions to the forestry industry. For more information on the S.C. Tree Farm click here.

To view past blog entries about prescribed fire click here.

Special thanks go to Sen. Chip Campsen for recognizing my Volunteer Award from the floor of the Senate, and for being a champion for sportsmen and conservation.


The 2011 Salkehatchie Longbeards Chapter of the National Wild Turkey Federation held their 13th annual Hunting Heritage banquet on Feb. 26 in Walterboro. The chapter was recognized with the third place award in the "Best of the Best Local Chapter" category, at the recent NWTF National Convention in Nashville. This is always a great fundraiser for wildlife conservation in South Carolina.
Posted by Jeff Dennis at 8:06 PM No comments: 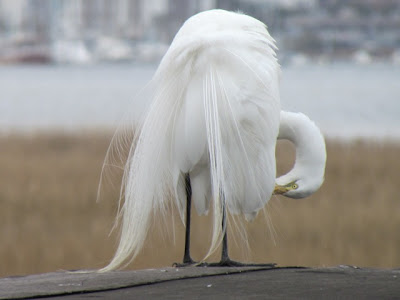 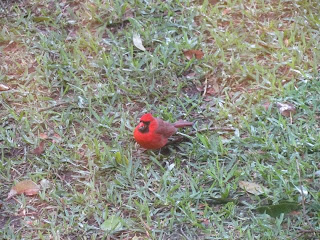 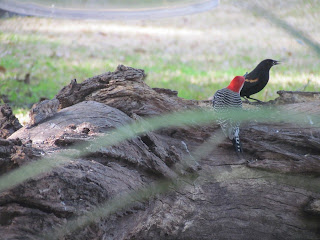