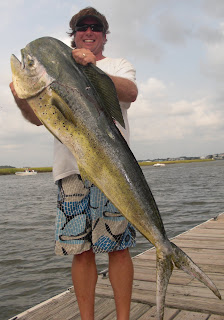 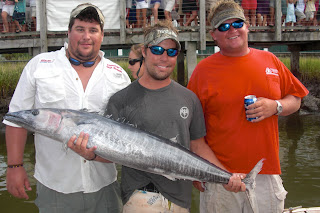 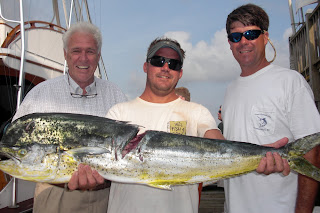 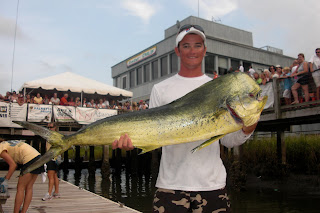 Twenty-two boats went offshore fishing on the final day of the 2010 S.C. Governor's Cup Billfishing Series - searching the deep blue for the elusive blue marlin. "Glory's Last Shot" is a phrase attached to the final major tournament on the PGA tour, describing a stage that is set for someone - or in this case a sportfishing team - to come from behind and make history. Well the fishing gods had no drama in mind on Saturday and the Edisto tournament was won by Rascal, a 50-foot Hatteras, based on the merits of their four sailfish releases on Thursday, despite having no releases on Saturday. Game On also had four releases on Thursday and finished in second place at Edisto, while Lil' Bit held onto its third place spot. All the leading meatfish also held their positions from Thursday, as the offshore bite dipped dramatically on Friday and Saturday.
Unofficially, Caramba takes the 2010 Series title of Best Billfish Boat by 400 points after winning back-to-back tournaments in the Series and its overall consistency including their Edisto Day One release of three sailfish. Day Three sailfish releases included two each from Major Motion, Trash Man and Sportin' Life, while the overall billfish release numbers for the Eidsto tourney were 40 sailfish and one blue marlin.
To view more blog coverage from the 2010 Edisto Gov. Cup click here.
PhotosByJeffDennis: A beautiful 28.5-pound bull dolphin brought back by Mark Daniels aboard Daymaker is shown off by his mate; Trey Kemmerlin sent this 28.4-pound wahoo to the scales but let his Plumber's Wet Dream crew pose with the fish; Look at the mahi that survived an attack from a billfish while being reeled in by Can't Complain; Emerson Reed and his 30.8-pound dolphin caught from Fat Boy in front of a packed and appreciative crowd at Edisto Marina
Posted by Jeff Dennis at 10:13 AM