The 2019 Edisto Billfish Tournament marks the first year since the marina expansion and fuel dock upgrades were completed this past winter. The robust number of 46 fishing boats entered in the competition for releasing billfish also contributed to the feel that the Edisto event has hit the big time. Edisto Beach is always bustling in late July, but when the Marina at Edisto Beach brings the boats, bands and fishing buddies together, it is a billfish bonanza. Trash Man out of Savannah, the boat with the most blue marlin releases, wins the 2019 Edisto Billfish Tourney.


The Trash Man fishing team is a regular participant at the Edisto Billfish Invitational, and is one of a handful of boats that come from other states such as Georgia, North Carolina and Virginia to fish in the final leg of the South Carolina Governor’s Cup Billfish Series. Owner Burke Wall and Captain Shelby Myrick guided Trash Man to three blue marlin releases, good for a total of 1800 release points, and earning the title of Outstanding Billfish Boat. Trash Man also wins the title of Outstanding Billfish Conservationist.

Finishing in second place with one blue marlin release and 6 sailfish releases is Jackpot, owned by Joe McKinney and Captained by Sean Dooley. Jackpot is also the unofficial winner of the 2019 Governor’s Cup Billfishing Series, which consisted of four tournaments in 2019.  Third place at Edisto went to Bench Mark, owned by Stephen Davis and Captained by Bobby Garmany, for releasing one blue marlin and four sailfish.

Posted by Jeff Dennis at 2:40 PM No comments: 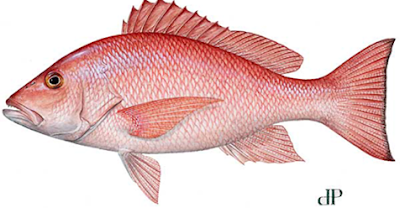 Recreational offshore fishing enthusiasts will get a chance to bump baits on the bottom in search of red snapper to harvest this weekend. on July 19 and 20. These fish can be caught at other times of the year, but scientists have determined that the species is currently overfished, and they enacted a mandatory catch and release practice until the red snapper fishery become sustainable. The exception being a few days in July when anglers can target these fish and score some supper back home too.

The weekend of July 12, 13 and 14 saw the first legal to keep fishing days for red snapper and the hot July weather cooperated with anglers by keeping sea conditions calm enough to fish. Lots of success in landing red snapper is being reported this year, and depending on what happens during the second weekend of the abbreviated red snapper season, there will be more debate about lessoning the restrictions on harvesting red snapper in the future. The recreational bag limit is one red snapper per person per day, with no minimum size limit.

The South Carolina Department of Natural Resources has freezers at select docks and marinas for recreational anglers to participate in the red snapper carcass drop off program. State biologists will collect data from the frozen carcasses such as length of the fish, and they remove the otolith, or ear bone, which can be measured to gauge the age of the fish. Each carcass will have a catch card filled out by the angler to supply additional information about the date of the fishing trip, and descriptions of any other bottom fish encountered.

To view the entire feature article in the newspaper click on Colletonian.
Posted by Jeff Dennis at 7:47 PM No comments:

The application process for all public SCDNR deer draw hunts is now open until the deadline of August 15. There are nine locations state wide for hunters to choose from for SCDNR public drawing deer hunts, but three of those properties have new regulations in 2019 and a new separate application form. The new lottery hunts are called unrestricted hunts because of the removal of any limitations on antler size in order for bucks to be legal to harvest.

Two of the properties located in Colleton County are now in the separate unrestricted draw hunt, Bear Island WMA and at Donnelly WMA, and the third property is Bonneau Ferry WMA in Berkeley County. The new unrestricted deer hunt lottery will operate the same in that applications that are not drawn will receive a preference point to use on their next consecutive deer draw hunt application. The removal of antler restrictions should lead to a greater chance for hunters to harvest a deer, and it could also lead to thinning out the deer populations at the Lowcountry properties that carry high numbers of deer.

It’s hard to overstate the good things that happen when people purchase or renew their South Carolina hunting license. Excise taxes come into play bringing federal dollars into S.C., and some monies go directly into management of thousands of acres by the S.C. Department of Natural Resources. A hunting license keeps one legal while exercising the freedom to hunt, and it also allows them the privilege of entering into a growing number of lottery draw hunts on these public lands.

To read the entire feature article in the newspaper click on Colletonian.

The month of July is a great time to be at the beach or on the saltwater nearby to soak in all the daily happenings in the marine ecosystem. Don’t forget that July will mark the start of the sea turtle hatchlings season that will run into the fall. Oysters play a natural role by filtering the saltwater and volunteers can join in the artificial oyster reef project in Meggett on July 16. The Carolina Coastal Discovery marine education program returns to Edisto Beach State Park on July 24, offering and educational boat ride on ACE Basin Appreciation Day.
The site of the oyster restoration project is Roxbury Park, a property owned by the Town of Meggett on Highway 174 just before Edisto Island. Toogoodoo Creek and the intertidal zone all around Roxbury Park make it an excellent nature preserve and it is open to the public for hiking and bird watching. Oysters are one part of the natural resources that come under strain from overharvest, but it is clear to scientists how to rebuild oyster populations. Replacing spent oyster shells to the estuary allows for new oysters to cultivate using the same shells, in a natural form of recycling. The Roxbury Park project on Tuesday, July 16 from 1 – 3:30 is collaboration between several conservation groups.

The educational boat ride on Wednesday July 24 from 10 – 12 is free, but space is limited. Participants need to visit the SCDNR website and claim one of the spots. And passengers must be 10 years of age or older. The purpose of the trip is the teach others to appreciate the ACE Basin, and that education begins at the Environmental Learning Center at Edisto Beach State Park. Participants assist in data collection during the cruise, since the SCDNR staffers record every creature encountered plus the water salinity levels. They also place an emphasis on connecting local conservation issues with larger concerns such as global warming.

To read the entire feature article in the newspaper click on Colletonian.

Posted by Jeff Dennis at 2:00 PM No comments: