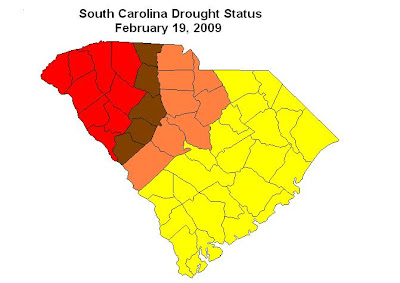 The S.C. Drought Committee met today and declared that 16 counties along the coast and in the PeeDee Region be added to incipient drought status. These same counties had previously been listed in the no drought category. Nine counties in the Upstate saw their status go unchanged, remaining in the extreme drought category. Hope Mizzell, S.C. state climatologist, addressed the DNR Board on February 13 and said that La Nina conditions persist and that the three-month forecast for the coastal plain is higher than normal temperatures and lower than normal rainfall amounts. Lowcountry farmers already know that the dry conditions will make  it tough for them again this year, just like in 2008. When the spring woodlands blossom and come to life they tend to drink up most of the standing water, and there does not seem to be much of that this year after light winter rains. Darryl Jones with the S.C. Forestry Commission said, "Given the forecast, I think we can expect greater forest fire activity and this increase can be attributed to the dry fuels resulting from the drought." Thanks to SCDNR for the drought map.
Posted by Jeff Dennis at 5:00 PM