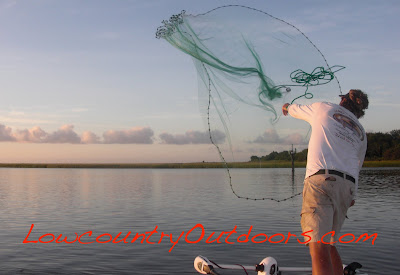 As of noon today SCDNR sold 5729 recreational shrimping licenses. Robert Boyles at SCDNR released this data at the Marine Advisory Committee this morning at Fort Johnson. While the license sales are down from the 2010 figures, a decent harvest of shrimp is forecast in 2011. The opening day of shrimp season is a great tradition in the Lowcountry Outdoors and here's hoping everyone finds lots of small to medium-sized shrimp for their freezer!

PhotoByJeffDennis: Jamie Hough casts his net in search of shellfish

SCDNR Press Release:
The 2011 shrimp-baiting season will open at noon Friday, Sept. 9 in South Carolina waters. Although an unusually cold winter resulted in some mortality of white shrimp, adequate numbers survived to produce a fair fall population. Timely rainfall this summer has also contributed positively to the population.

The shrimp baiting season lasts 60 days, resident licenses cost $25 and non-residents licenses cost $500. The catch limit is 48 quarts of shrimp measured heads-on (29 quarts heads-off) per boat or set of poles per day, and each boat is limited to a set of 10 poles. When taking shrimp over bait, no cast net may be used having a mesh smaller than one-half inch square measure or one inch stretch measure.

Post-season mail surveys conducted every year since 1988 indicate that recent total catches have been less than 1 million pounds per season (heads on) after peaking at more than 3.6 million pounds in 1997. Despite the decline in total catch, catch per trip has remained relatively stable, averaging about 20-22 quarts per trip since 2001. The stable catch-per-trip suggests that shrimp abundance has remained relatively good, but fewer licenses and shrimping trips are resulting in a lower overall harvest. Recent sampling by DNR's Crustacean Monitoring Program caught fair numbers of shrimp along the southern coast, according to Larry DeLancey, program supervisor. Areas around Port Royal Sound and Georgetown produced the largest shrimp.
Posted by Jeff Dennis at 1:24 PM