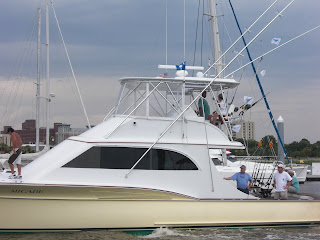 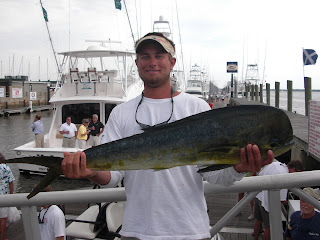 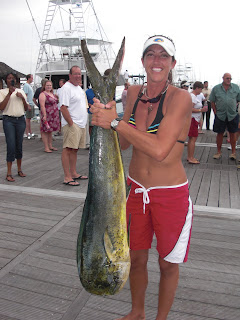 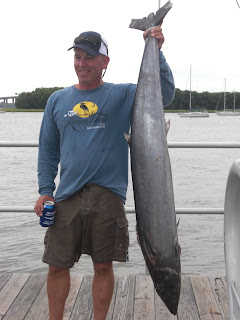 The 66-boats that fished on Day One of the Megadock Tournament experienced seas that were 3 to 6 feet with an East Wind, but the south swell made for steep waves. The unofficial results from Day One are 52 sailfish releases, two white marlin releases and one blue marlin release. The weigh-in was well attended, with the HWY-Viking gang front and center, and one huge wahoo came in plus lots of smaller dolphin. Big Sky released the blue marlin and also released one sailfish, giving them an 800-point total. Micabe had four sailfish releases, also good for 800-points, and they grabbed first place based on the fact that they reached the 800 point total first. Rookie IV also released 4 sailfish and so did Full Pull. Allie Darby aboard Artemis handled one of the day's white marlin giving them 300 points towards the Megadock leaderboard. Dolphin weighed in included Albert Freeman's 15.2-pound mahi aboard NOFA, Tim Schryver's 20.9-pound mahi aboard Hot Shot, and Alex Ragland's 25.6-pound mahi aboard My Three Sons. The festivities continued under the mega-tent with live music from the Calvin Taylor Band, and Mike Altine catered a fried chicken dinner for the hungry anglers. Lowcountryoutdoors.com salutes the southern hospitality extended to everyone by the Megadock staff.
To view more blog coverage from the 2009 MegaDock click here.
Photos By Jeff Dennis: Micabe (pronounced Mycabee) comes to the docks with four sailfish flags, Jason Fowler of Homewaters caught this 11.7-pound mahi aboad Brainstorm, Tara Asbill is leading the dolphin category with her 28.8-pound mahi aboard Finatic, and Bobby Krivohlavek brought a 59-pound wahoo with him from Reel Hooker
Posted by Jeff Dennis at 9:48 PM