Swordfish Surprise at the Charleston Bump 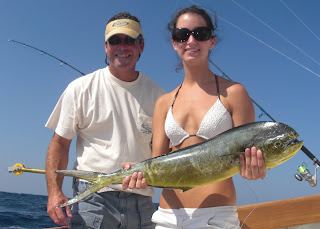 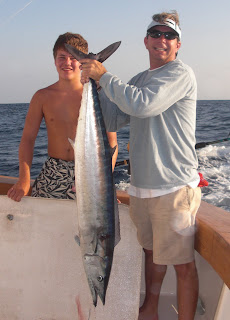 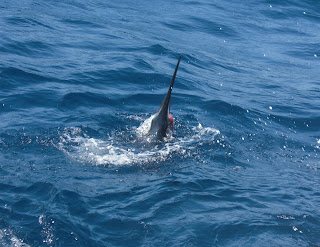 A crew of ten willing anglers followed Captain Pete Loy into the North Atlantic Ocean on an overnight quest for swordfish. While the Lil' Bit did not quite reach the Charleston Bump, they drifted for swordfish in about 1400-feet of water using glow sticks on their rigs of freshly caught flying fish. Sharks proved to be the only thing biting overnight, and the surprise was that no squid was seen all night - which are thought to be the main forage for swordfish. Sunrise came and the crew turned their attention to trolling which yielded some peanut dolphin and a nice wahoo. When the time came to switch to dink baits for sailfish the action started immediately, and a young angler caught his first ever sailfish, while another sail dogged the teaser and then left the bait spread before becoming a double-header.

To view my feature article in the Charleston Mercury click here.

Photos By Jeff Dennis: Captain Pete Loy put his niece Lizzy on her first-ever dolphin - congrats from Lowcountryoutdoors.com!, a 45-pound wahoo piled on the left short line that I had just put out (Griffey Loy assists with the fish box), a sailfish shakes his head to try and spit the hook
Posted by Jeff Dennis at 9:14 AM