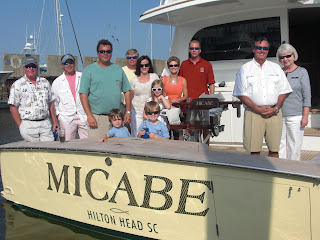 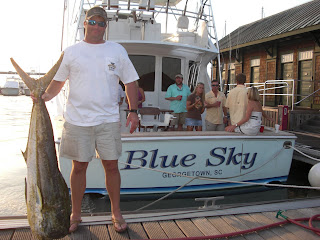 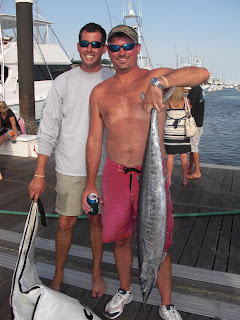 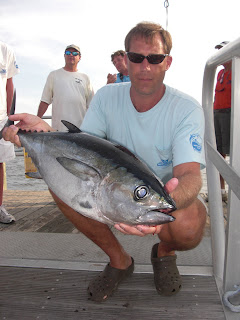 Sixty-one sportfishers headed out to the deep blue sea in the final day of competition of the Governor's Cup Billfishing Series. Preliminary reports of 52 billfish releases on Day Three would add up to a three-day total of 152 releases - a new Megadock record! Lowcountryoutdoors.com is glad to provide these unofficial results. Congratulations to Micabe for winning the 2009 Megadock Tournament with nine sailfish releases. Owner Mike Larrow credits Captain Chris Jennings for putting the 55-foot Jarrett Bay sportfisher on the fish during the first two days of the competion. Larrow has previously served 8 years on the board of the Governor's Cup Series and said, "I have a strong conservation ethic and I love seeing the tournament with a 100% release rate." Miss Annie took second place in the Megadock with 8 sailfish releases. Four blue marlin were released on Day Three of the competition, giving the tourney a total of five blue marlin released - with special commendation going to Cowboy for catching a blue marlin that had been tagged by The Billfish Foundation and reporting the tag to SCDNR. The top tuna and wahoo entries from the first two days held up, while a new dolphin leader came in with Willy Bell's 42-pound mahi caught aboard Blue Sky out of Georgetown.
To view more blog coverage from the 2009 MegaDock click here.
Photos By Jeff Dennis: The crew of the Micabe celebrate their victory at the 2009 Megadock, Willy Bell shows off his winning dolphin in front of the Blue Sky, Butch Cooper caught this 20.3-pound wahoo aboard Sweet Deal, and weigh-master Jim Westerhold demonstrates the proper way to display a blackfin tuna
Posted by Jeff Dennis at 4:13 PM