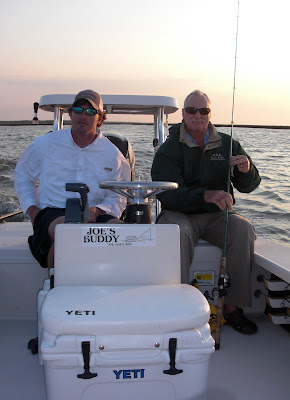 Captain Mark Nichols was in South Carolina recently and subsequently gave some tips to local anglers about how to best use his D.O.A. shrimp to catch some 'stupid' fish. Captain Mike Able Jr. grew up fishing in Mount Pleasant and has been running Able Minded Charters (843-475-7696) for five years. He averages about 80 trips per year, and spends the rest of his time working in Haddrell’s Point, the tackle shop owned by his father. Mike Able Sr. is the reason that Jr. grew up fishing and Jr. calls him “One of the original redfish guides in the Charleston area.” Able-minded Charters runs an 18-foot Hewes Bonefisher flats boat, and offers Shimano Stradic 2500 reels on G. Loomis Medium-Light fast action seven-foot rods. Able Jr. said. “June fishing revolves around water temperatures that will be in the high 70’s and low 80’s. Everything associated with live bait and fishing has been starting late in 2010 because of our cold winter. June live bait options might include menhaden, blue crabs, shrimp, mullet, and mud minnows, but artificials work too. We start throwing topwater lures in the morning, and then work through an assortment of jigs, and maybe end up with a D.O.A. deadly combo. Because everybody loves to see a cork go under.” The deadly combo lure is an oval float on a ‘clacker’ rig with beads that make noise to attract any curious fish, and it comes pre-rigged with a D.O.A. shrimp underneath it. Able Jr. said, “I like the Fiji Chix color with its darker back, lighter belly and chartreuse tail – allowing it to work well on reds and trout in all water clarity conditions.” Fiji Chix also has some glow color in its body and is speckled with red, black and silver flakes. Captain Mark Nichols of Stuart, Florida invented the D.O.A. shrimp and was in S.C. to speak at a seminar at Haddrell’s Point about his fishing knowledge. Nichols said, “The reason we add glow color to many of our baits is to mimic the bioluminescence that I see occurring naturally in the marine world. I fish all the time but I still want it to be a fast and easy, and effective.”

To view a past blog entry about Haddrell's Point click here, and for DOA lures click here.

PhotoByJeffDennis: Capt. Mike Able Jr. and Capt. Mark Nichols out in the boat in Gray Bay
Posted by Jeff Dennis at 5:47 PM