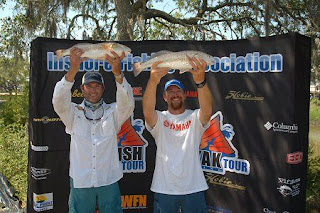 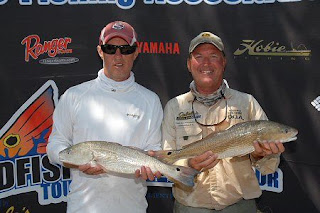 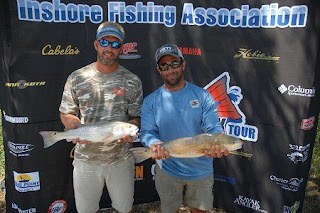 The 2011 Inshore Fishing Association returned to Charleston on June 4 and 5, fishing out of the St. John's Yacht Harbor Marina on John's Island. The Saturday powerboat competition saw 52-teams vie for the top spot that includes a NEW Ranger fishing boat. Charleston-based team J.R. Waits and Hylan Furnis took second place, Ron and Caleb Davis took third place, Ashley Lowder and Capt. Reed Simmons used D.O.A. lures to land the fourth place spot, while Captain John Ward and James Smoak used secret spots to reel in the fifth place fish!
Sunday saw the IFA Kayak event that pitted 19-crews in a test not for the heaviest redfish, but rather for the longest legal redfish and trout. The two measurements are then added together for an aggregate score to decide the winner. Only three anglers managed to bring both a trout and a redfish to the scales - proving that kayak anglers have to be sharp in order to produce on a tournament day - especially when a new Hobie Pro Angler kayak is on the line!
To see past blog coverage of the 2010 IFA Redfish and Kayak tour click here.
PhotosByJeffDennis: Captain J.R. Waits holds up a celebratory redfish after taking second place; Captain Reed Simmons (khaki shirt) used his knowledge of D.O.A. lures and past tournament experience to finish in fourth place; Captain John Ward (blue shirt) doesn't fish in all the tournaments but usually does well when he enters one such as this fifth place finish
Posted by Jeff Dennis at 10:00 PM