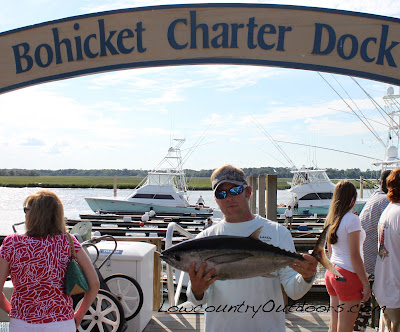 The 27-boat fleet went fishing for the Bohicket Governor's Cup title, and released 16 billfish on Saturday. In the end it was Summer Girl, a 42-foot Post, who released a blue marlin on Saturday, adding to their two blue marlin releases on Friday, giving them 1600 points. They released both of their blue marlin on Friday in the afternoon, and they weighed in a 50.2-pound mahi as well. Captain Stevie Leasure said Saturday's blue marlin was caught by Kimberly Smith, who went on the claim the title of top lady angler! Miss Magnolia will finish in second place on the strength of her two blue marlin and one white marlin on Friday, since they had no releases on Saturday. Third place goes to Cotton Picker from Savannah for the two white marlin and one blue marlin they released. The heaviest overall dolphin from Friday held up for Gray Eubank, but the lady angler mahi was eclipsed by Wildlife's 45.2-pound mahi caught by Diana Lackey. One blackfin tuna came to the scales from Brian DeMille aboard Trash Man, and the 14.2-pound tuna is took home the top tuna spot.

To view my feature story in All At Sea magazine about the Gov. Cup after two events click here.

To view past blog entries from the 2012 Bohicket Gov. Cup click here.