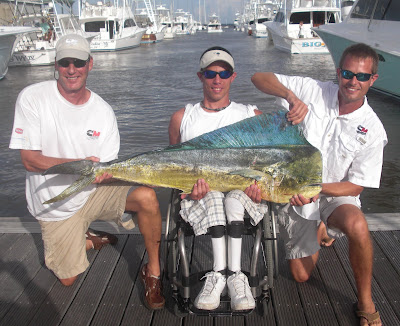 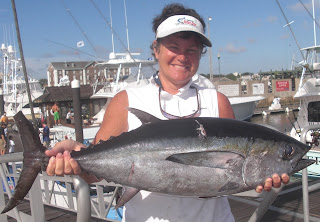 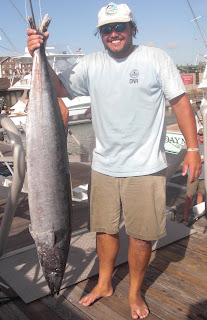 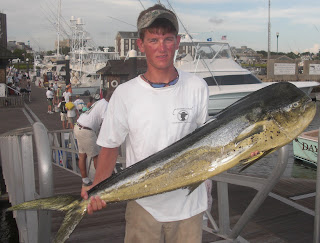 Here is a quick primer on the MegaDock Gov. Cup leaders after Day One. (unofficial results)
Cacique leads the billfish release points with five sailfish release for 1000 points.
Jabez is in second place with four sailfish releases, good for 800 points.
Full Pull is in third place with two sailfish releases and one white marlin release, 700 points.
Artemis is in fourth place after Day One with three sailfish releases worth 600 points.
Overall there were 42 billfish releases tallied on Day One with 40 sailfish and two white marlin in the mix.
PhotosByJeff Dennis: Who is the MAN!? J.R. (James Ray) Ambrose who fished aboard the Quad Zeus Cummins Diesel sportfisher. He brought this 34.2-pound bull dolphin to the scales even though he was only 'fun fishing' on Thursday and his fish was not legal.
Amy Bennett fishing aboard Rodeo dredged up this 21.4-blackfin tuna, and leads the outstanding tuna category
Montukie Lewis knows how to catch 'em up and his 42.4-pound wahoo from El Tejano leads the wahoo category
With five minutes left in the weigh-in that cut off at 7 p.m. Scott Frazier brought his 30.4-pound mahi mahi to the scales for Jim Westerhold to weigh. Frazier was fishing on the Pursuit Class boat called Game On out of Bennett's Point and leads the dolphin division
To view more blog coverage from the 2011 MegaDock click here.
Posted by Jeff Dennis at 9:57 PM