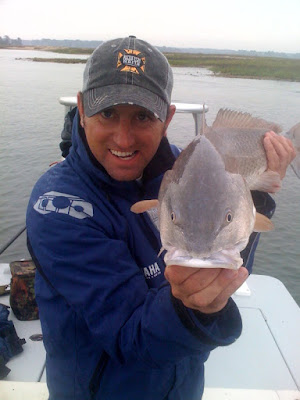 The 2nd leg of the Lowcountry Redfish Cup was fished by 39 teams in Savannah, Georgia on Saturday April 24th. The two-man teams are allowed to weigh in two live redfish giving the team with the highest combined total weight the victory in Savannah. After a series of five events have been fished (check the previous results under the 2/27 blog entry) then a final event will be held on November 12 at a destination to be determined. Congrats to Team Egret and their 9.25-pound weight total - good enough for first place in Savanah. Team Egret's Fred and Tripp Bricketto weighed in two reds that weighed 4.35 and 4.9 pounds respectively. Second place went to Team Mud Dawg (Tom and Brent Worley) for their 4.2 and 4.05 redfish that totaled 8.25-pounds. Third place went to Team 2 Reds (Shane and Chuck Lather) for their 4.2 and 3.95 redfish that totaled 8.15-pounds. Fourth place went to Team Redfish Mafia (Capt. Jamie Hough and Ronnie Pitts) for their 4.6 and 3 pound redfish that totaled 7.60-pounds.

After the first two events Team 2 Reds is leading the Lowcountry Redfish Cup points standings, and Team Egret is currently in second place. To view past blog entries from the 2010 LRC click here.

PhotoByJamieHoughofwww.flatspotcharters.com: Angler Ronnie Pitts, one half of Team Redfish Mafia, with one of the many oversize redfish that was caught on tournament day
Posted by Jeff Dennis at 5:32 PM